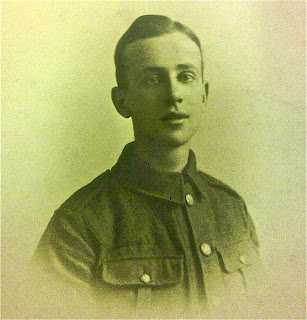 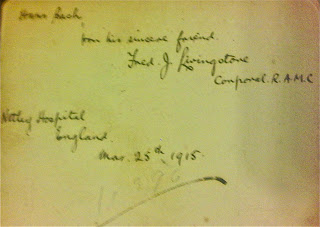 
Nearly 15 years ago, when I was poking around in a curiosity shop in Cologne, Germany, I found this picture.  The young man's beauty first caught my eye, in his simple military uniform, and a look on his face that I cannot describe--lips slightly parted, head slightly tilted, eyes open to the world, light on one side of his face and darkness on the other, and fully relaxed, almost in an ecstatic, somewhat removed reverie.  I have wondered all of these years who this beautiful young man is, and what became of him during or after the war to end all wars.

More than that, I wondered how this picture of an English soldier made it into the hands of someone who, by all accounts, looks to have been on the side of the enemy.  Who was Hans Bach?  Was he a young student that Fred befriended before the hostilities broke out that perhaps put them on opposite sides of the fence of mortality?

Were they friends, brothers, lovers, star-crossed, brought together by a fate that so soon turned as would put them in each others' harm's way?

A little digging on the internet today puts Laffutte, the photographer, at 184 Western Road in Brighton & Hove, about 60 miles from Netley, where Fred was serving in the great hospital there with the Royal Army Medical Corps, in which he was a Corporal in 1915.

Which makes me wonder...was Hans an enemy soldier that Fred met, and perhaps helped nurse back to health, while he was a patient at Netley Hospital, having been wounded in the war?

The Royal Victoria Military Hospital at Netley was opened under Queen Victoria's rule in 1863, after 7 years of construction, being then the largest military hospital in the world.  During WW1, it was the site of over 50,000 patients, some of whom were perhaps German prisoners of war as was the case 25 years later during WW2, although the hospital also treated American soldiers in vast numbers. 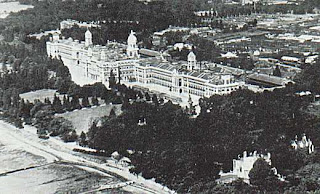 We will likely never know what the relationship was between Fred and Hans, what became of them (despite searching British military records for someone whose name and age would have matched Fred's), or whether they met at the hospital or before.

But what is certain is that they lived, that they served, that they had a fondness of some kind for each other, and that they found themselves as a part of one of the bloodiest, yet most hopeful chapters in the history of the human struggle of battle.

In that we may honor their memory, and the memories of millions who served, fought, loved, and died, today, 11.11.11, 93 years after the first Armistice Day.
Posted by Chris at 11:13 PM

Chris
Minneapolis, MN, United States
This quotationlet of Martin Luther seems to sum things up nicely: "(for I am neither wood nor stone)."

Postings of the Past

Some Blogs I Read